The creation of the Reserve is considered one of the most ambitious programmes of its kind to be undertaken anywhere in the world. Thanks to Operation Genesis in 1979, which involved the game-fencing of the reserve and the re-introduction of many long-vanished species, the park now has in excess of 7 000 animals including 24 of the larger species. The crater of a long extinct volcano is the setting of Pilanesberg National Park – a fascinating alkaline complex produced by volcanic eruptions some 1300 million years ago. Pilanesberg is one of the largest volcanic complexes of its kind in the world. Its rare rock types and structure make it a unique geological feature. The area is fringed by three concentric ridges or rings of hills – the formation rises from the surrounding plains like a bubble. The structure of the park is termed the “Pilanesberg National Park Alkaline Ring Complex”. Ancient, even by geological time scales, this extinct volcano is the most perfect example of an alkaline ring complex. A number of rare (but not necessarily economically important) minerals occur in the park. Pilanesberg National Park rates high amongst the world’s outstanding geological phenomena. Pilanesberg has survived ages of erosion and stands high above the surrounding bushveld plains. The early presence of man can be seen in the numerous Stone and Iron Age sites that are scattered throughout the park. The park exists within the transition zone between the dry Kalahari and wetter Lowveld vegetation, commonly referred to as “Bushveld”. Unlike any other large park, unique overlaps of mammals, birds and vegetation occur because of this transition zone. Springbok, brown hyena, the red eyed bulbul, and camel thorn trees usually found in arid areas are found cohabitation with moist-area-limited impala, black eyed bulbul and Cape chestnut trees. The colourful hues, varied habitats and panoramas will delight and entertain photographers and visitors. The very topography makes the area a feast for the eye. Here are syenite koppies, thickly forested ravines, typical bushveld and also rolling grasslands and lightly wooded areas. Off the centre of the park is Thabayadiotso, “the Proud Mountain”. The Park ranks among the largest of the national parks in South Africa (it is in fact the fourth largest park) and covers an area of 55 000 hectare. The beauty of Pilanesberg is reflected in a large central lake, the Mankwe Dam. Over time, wind and water have carved a spectacular landscape with rocky outcrops, open grasslands, wooded valleys and thickets. The creation of the Pilanesberg National Park is considered one of the most ambitious programmes of its kind to be undertaken anywhere in the world. The Operation Genesis, which involved the game-fencing of the reserve and the reintroduction of long-vanished species, began during the late 70’s. Today, Pilanesberg National Park accommodates virtually every mammal of southern Africa. Also home to the Big Five.

An abundance of wild life proliferate in 580 km of diverse and arresting bushveld terrain. The park is home to healthy populations of lion, leopard, black and white rhino, elephant and buffalo – Africa’s “Big Five”. A wide variety of rare and common species exist with endemic species like the nocturnal brown hyaena, the fleet-footed cheetah, the majestic sable, as well as giraffe, zebra, hippo and crocodile, to mention but a few.

Bird watching is excellent with over 300 species recorded. Some are migrants, others permanent inhabitants; some eat carrion or live prey, others eat seeds, fruit or tiny water organisms. There is a self-guided trail in the Walking Area at Manyane Complex in the east, which offers environmental education whilst enjoying game viewing and bird watching on foot. Also at Manyane is a walk-in aviary with over 80 species of indigenous birds.

Visitors are offered many opportunities to experience the wonders of Pilanesberg. There are nearly 200 kilometres of excellent quality roads for either self-drives or guided drives, and professional guides operate within the park. Numerous hides and scenic picnic sites enable the tourist to experience “out-of-car” experiences as well.

Accommodation ranges from upmarket lodges to caravan and camping facilities. 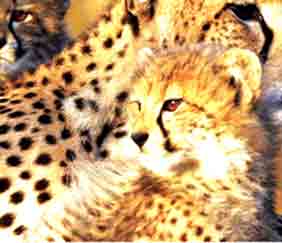 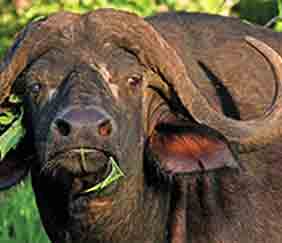 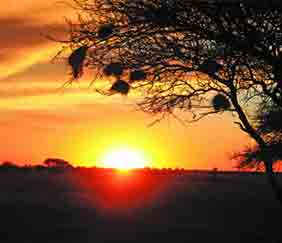 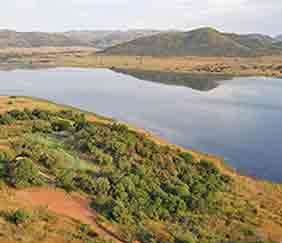 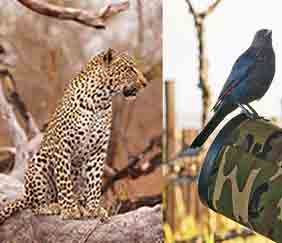 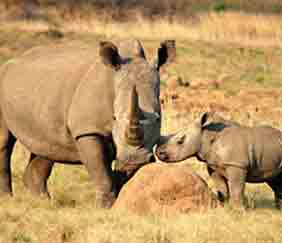